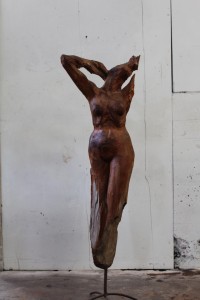 David began sculpting in his teens , mostly figurative work carved in wood. Returning to Auckland in his early twenties he worked in a variety of jobs including boatbuilding and construction and gained skills with glass and carbon fibre, steel fabrication, welding and woodwork.

He became involved in the performing arts, experimenting with writing and acting and was shortly employed full time designing and making sets and props for theatre , dance and film production. McCracken saw the potential of steel fabrication for quickly producing large set pieces and at the same time began making sculpture from readily available and inexpensive scrap when he could afford little else. He also experimented with a variety of materials including granite and basalt boulders, synthetic hair found objects and glass roving. He furthered his metal fabrication skills to include  aluminium, stainless steel, titanium, and corten steel and began casting in bronze and stainless steel. He designed a number of furniture items which were produced in limited numbers.

In 2000 he had his first solo exhibition entitled ‘Fabrications’  at the McPherson gallery and exhibited an inovative floating installation in lake Pupuke at the Beecroft Sculpture exhibition, marking the beginning of a number of floating sculptures. In 2001 he was short listed for the Wallace art awards and had another exhibition -‘H2O2’  at McPherson gallery as well as a number of private commissions. Work slowed for a spell after the birth of his third child in 2002 but by 2003 he had increased production and was sculpting full time.

McCracken is continually developing and adding to his vocabulary of systems and continues to try new techniques such as that employed in ‘drop forged artwork’ – achieved by dropping a wrecking ball from a crane onto a sheet of alluminium  placed atop a sand bed to generate a massive ‘dent’… or hydroforming steel into complex compound forms with hydrostatic pressure, or driving over sheets of steel with a vehicle to create curves. All he requires of these techniques is that they are reduced to the fewest possible actions ,and remain economical and ‘analogue in spirit’.  He continues to experiment with water born sculpture regarding it as both a challenge and the ‘perfect venue for sculpture’ and is developing systems for large scale land-art installations.

McCracken has exhibited widely in outdoor exhibitions including Sculpture on the gulf and Sculpture by the sea (in Sydney) and has received a number of awards for his work. He has commissions in New Zealand and internationally and continues to develop his oeuvre.